Pew States is out with a new study analyzing fiscal federalism trends in the United States. Based on data from the U.S. Census Bureau’s Annual Survey of State Government Finances they found that 30.0% of state budgets funds come from the federal government. The study states:

As the nation emerged from the Great Recession, federal dollars made up a bigger proportion of states’ revenue from fiscal year 2009 to 2012 than at any other time in the past 50 years. After peaking at 35.5 percent in fiscal 2010, however, the share fell back within its historical range in fiscal 2013, dropping to 30.0 percent.

Even at 30.0 percent, the federal share of 50-state revenue was above its 10-year prerecession average of 28.5 percent. Federal dollars remained the second-largest source of states’ money, accounting for approximately $513.5 billion of the $1.7 trillion collected by state governments in fiscal 2013.

Pennsylvania ranked 29th with 30.4% of its budget coming from the federal government. Historically Pennsylvania’s share of federal dollars as a percentage of its revenues has been slightly below average. 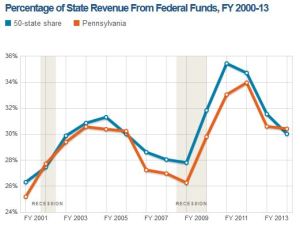